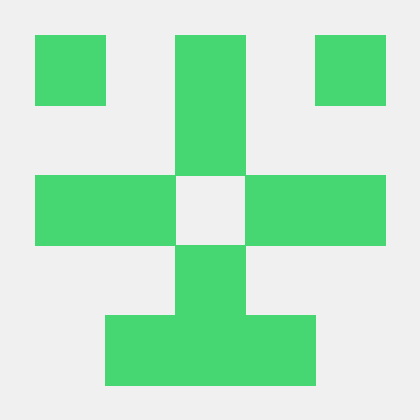 Nonblocking programming can provide performance benefits over locking, but getting it done right is significantly harder and requires careful testing. When it comes to memory barriers, there is all sorts of confusion and misleading information. Because memory barrier can be counterintuitive, using them wrongly is easy, and applying them correctly requires a lot of effort and headache. The benefits memory barriers provide may not be worth it in most high-level applications. However, memory barriers are handy in performance critical software.

In the past, a system with a single processor executed concurrent threads using a trick called “timeslicing”, where one thread is running and the others are sleeping. This means that all memory accesses done by one thread appeared in an exact order to all the other running threads. This is called a sequential consistency model. Nowadays, multiprocessor systems are very common and concurrent threads are truly running at the same time, so sequential consistency is not guaranteed because:

If the methods run on different threads, there are a few possibilities for the values of r1 and r2:

In all of the cases above, either r1 = 0 or r2 = 0 but never both r1 and r2 are 0. Is it possible that both r1 = 0 and r2 = 0? The answer is yes though it is counterintuitive, but how ? A processor can defer its store operations in a buffer, and this causes operations to be out of order. If both stores to x and y are delayed, then the load from x in Thread 1 will read 0, and the load from y in Thread2 will read 0 too!

NOTE: You must compile in release mode.

Even if you declare the variables as volatile, it won’t help! I’ll discuss volatile shortly. Anyways, to fix the problem, add a memory barrier Thread.MemoryBarrier() between the store and load operations in each thread. We’ll come back to this example later after discussing memory barriers.

The following loop will run forever. Why ?

Looking at the disassembly code, I see the following for the thread t body:

This time it is JIT, not the hardware. It’s clear that JIT has cached the value of the variable terminate in the EAX register. The program is now stuck in the loop highlighted above. If you don’t know assembly well, the highlighted section above is equivalent to the following C# code.

Either using a lock or adding a Thread.MemoryBarrier inside the while loop will fix the problem. Or you can even use Volatile.Read. The purpose of the memory barrier here is only to suppress JIT optimizations. Now that we have seen how software and hardware can reorder memory operations, it’s time to discuss memory barriers.

We saw how the hardware and JIT could reorder memory instructions. This can be a problem for communication between different processors as we saw in the examples above. Memory barriers (aka memory fences) are a way to tell the compiler, JIT and the processor to restrict the ordering of memory instructions.

It’s important to note, in general, memory barriers are needed for communication between different processors (There are exceptions of course, such as using a memory barrier to suppress the compiler or JIT optimizations). If the system has only one single processor, then there may not be a need for memory barriers.

There are different kinds of memory barriers:

The following are one-way fences based on the direction of movement.

Now after introducing memory barriers, let’s take a look at the memory models for certain hardware and CLR. The following table describes whether reordering is allowed for certain memory operations. A comma is used to indicate two consecutive operations. For example, Load, Load indicates a load operation followed by another load operation.

A few comments based on the table above and after examining detailed documentation:

Although a C# lock eliminates the need for a memory barrier. A C# lock is sometimes considered an expensive operation because it can lead to contention and thread descheduling. Smart programmers avoid locking if possible. Fortunately, processors provide atomic instructions such as xchg. Also, a simple write or read is considered an atomic operation on modern processors. Atomic instructions happen instantaneously and are much more efficient than locking. For example, the Interlocked class exposes methods that provide atomic behavior that take advantage of the processor atomic instructions directly.

Why do we need atomic instructions in high-level programs? In the following example, if you run the two methods concurrently on two different threads, you expect result to be 200,000.

But after running the example on my machine, I see the following:

In fact, every time I run it, I get different a result!

Note that even when declaring result as volatile, I always get a corrupt value.

Looking at the disassembly code, I see that JIT translates it into:

Obviously, the above instructions are not atomic. Imagine that both threads execute at the same time, and the 2nd thread reads the same value for result as the first thread, then both will set result to the same value. This happens because result was out of date. That is also why result is always less than or equal to 200,000.

Although locking around the increment would solve the problem, there is a more efficient way to fix the problem. Interlocked comes to rescue:

Looking at the disassembly after we introduced the Interlocked class

Why did JIT not use lock add instead of lock xadd?

It’s because the implementation of Interlocked.Increment in the .NET Framework looks like this

Interlocked has other useful methods such as Decrement, Add, and CompareExchange.

Let’s revisit the Example 1 to see how JIT translates a memory barrier:

Looking at the disassembly of Thread1 method after introducing the memory barriers, we see:

On my Intel64 machine, JIT replaced the memory barrier with a dummy instruction (ie lock or). In this instance, this instruction does change the value of anything (since any value bitwise OR 0 yields the same value). However, locked instructions have the same effect as a memory barrier in my case, which means they also flush the store buffer.

Although the effects of memory barriers depend on the hardware, software must be designed in a way to allow for the common denominator. Additionally, there are common facts about memory barriers:

Modern processors prefetch data from main memory before the program needs it. The goal is to predict which data the program needs to consume. This makes the data immediately available when the program execution instruction gets to the point of the LOAD.

It is possible that the processor did not need the value it had prefecthed. This is probably because a branch has circumvented the execution flow. In this case, the prefecthed value can be discarded or cached for later use.

Although load speculation makes a program run faster, it can make the program see stale values. 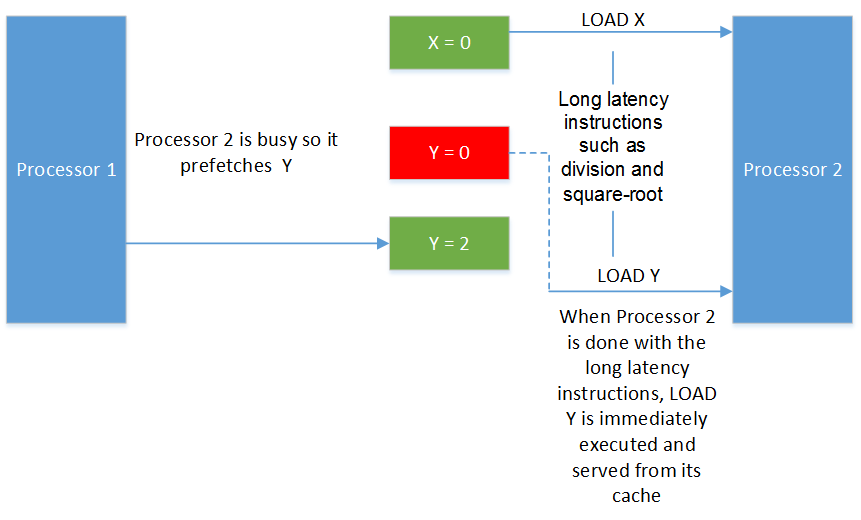 The order of memory operations as in the above figure:

A single barrier alone will not solve the problem that we discussed earlier. You can try that yourself by removing one of the barriers and running the program again!

A lack pf pairing can cause problems, for example, consider X = Y = 0 initially.

Processor 2 might see the order of memory operations as follows 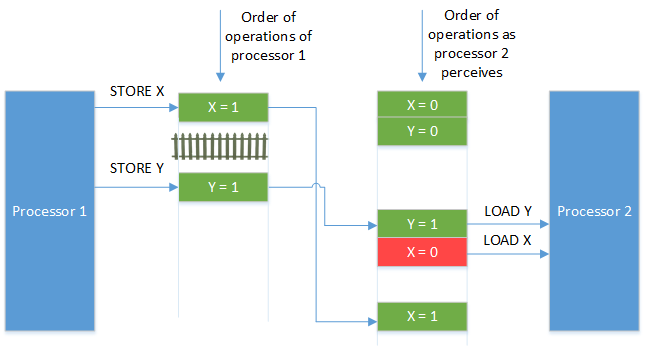 Despite the barrier in processor 1, processor 2 might perceive the wrong value of X. To solve the problem, a memory barrier is needed above the LOAD of X in processor 2. 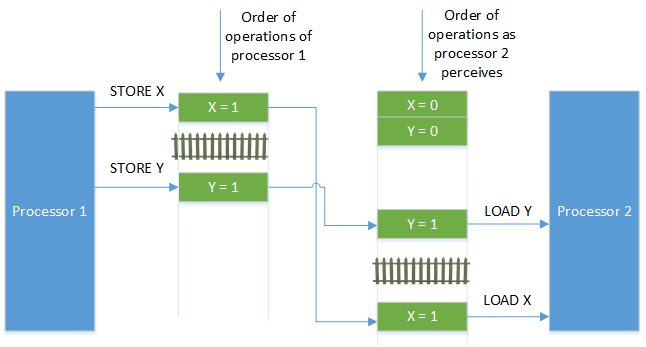 Processors rely heavily on caches. It is in fact common for each core to have its own cache, and it is possible for some cores to share the same cache. Modern Intel processors support a mechanism called “Cache locking” where the processor instead of locking on the system bus, it updates the value internally in its cache and relies on cache coherency.

Maintaining the coherence of all the caches is not the programmer’s job. However, the programmer should be aware of the consequences of cache coherence. Although all caches should be coherent, the order in which the memory operations happen is not guaranteed. Think of cache coherence as a notification system, if a processor makes changes, all the other processors will be notified immediately of the changes, but the actual changes may not be applied immediately because a cache has a queue of all the memory operations that need to be applied to it. Memory barriers have effects on this cache and therefore can restrict ordering.

A cache line is a fixed-length block of data. Data flows among processors’ caches and main memory in terms of cache lines, not individual bytes.

Is it possible that LOAD Y comes up with 0 even though it ran after processor 1 STORE Y = 1?

The answer is “yes”.

The barrier between the loads in processor 2 does not guarantee that Y will come up with 1, but it does guarantee that X will always be 1 provided that it ran after processor 1’s memory barrier.

Here is how Y might come up with 0 instead of 1 even though it ran after the store Y = 1:

To fix this issue, a new pair of memory barriers is needed:

Note that one barrier alone is not enough.

Notice how all the barriers are paired.